San Sebastian is All In! New York Times says…

When the cool evening breeze whistles down the narrow lanes of San Sebastián’s Parte Vieja, the rumble of storefront grates being raised echoes beneath the wrought-iron balconies and signs emblazoned with the blocky typeface of Basque Country.

The Old Town in Donostia — as every proud Basque will tell you the city is rightly called — is preparing for the nightly txikiteo, the sociable crawl from one pintxo bar to the next.

This gracefully aging belle epoque city on the northern coast of Spain is renowned for its cuisine, the backbone of which is the pintxo. These small snacks arrayed on countertops in bars across the city range from simple anchovy-topped toasts to culinary masterpieces in miniature.

The highest concentration of pintxo bars is in the Parte Vieja, a compact grid of stone-paved pedestrian streets at the foot of Monte Urgull.

Although a txikiteo in the Parte Vieja is rarely confined to a single street, everyone invariably winds up, at some point in the night, on a 200-yard stretch of my favored lane: Calle 31 de Agosto, the only street to survive a devastating fire on that date in 1813.

Traditionalists linger beneath the legs of jamón Ibérico hanging above the wooden bar at La Cepa (No. 7-9), savoring tissue-thin slices of Spain’s superior cured ham.

Or they gather under the awning of Gandarias (No. 23), a locals haunt serving classic pintxos like the skewer of anchovy, olive and guindilla pepper collectively known as the Gilda.

More-contemporary palates are sated at A Fuego Negro (No. 31) with playful pintxos like hot squid-ink “doughnuts” and olives filled with vermouth.

Of the many other pintxo bars on the street, none is better for a final stop than Atari Gastroteka, on the corner with Calle Mayor (No. 18). The expertly mixed gin tonics are why you’re here, though the location facing the beautiful Baroque facade of the Basílica de Santa María del Coro certainly doesn’t hurt.

Carry your bulbous glass out to the church steps and bask in the golden streetlight glow until someone shoos the crowd inside or the hour grows so late that the farewell refrain — “Agur!” — chases you home. 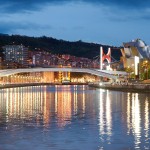 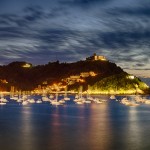 Copyright © Basqueguides - Design by mweb
Abrir chat
1
Powered by
How can we help you? Please click on the green button to send a message